The 60 attendees heard reminiscences about Wilkinson and his work from several attendees who knew him.  Sven Hammarling opened the proceedings with personal reflections on Wilkinson. Margaret Wright discussed some of the treasures in lecture notes from courses that Wilkinson taught at Stanford University (1977-1982). We have recently added these notes to our Wilkinson web page. Nick Higham announced the availability of the Argonne tapes, which are videos of Wilkinson and Cleve Moler lecturing at an Eigensystem Workshop held at Argonne National Laboratory, Illinois, USA, in June 1973.

We were pleased to welcome two of Jim Wilkinson’s nephews, John Liebman and Danny Liebman, together with John’s wife Liz.

Attendees were able to wish speaker Cleve Moler a happy 80th birthday and share two birthday cakes with him.

Photos from the conference appear below. Click on a photo to enlarge it.

Slides of the talks are available at the conference web page. The first day’s lectures were professionally videoed and the videos are available on the NLA group’s YouTube channel: here is a link to the playlist.

Thank you to all the speakers and attendees for their participation.

We gratefully acknowledge sponsorship from the Royal Society, The Alan Turing Institute, The QJMAM Fund for Applied Mathematics, The Numerical Algorithm Group and National Physical Laboratory. 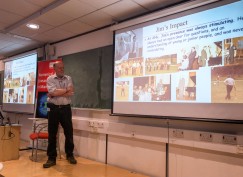 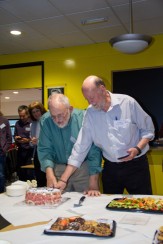 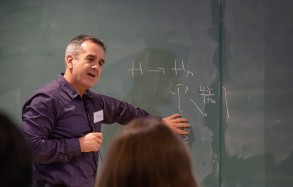 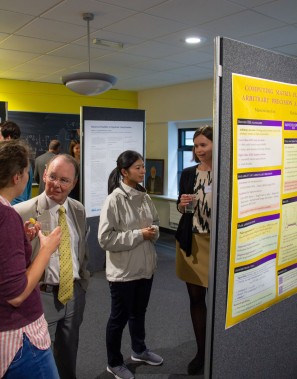 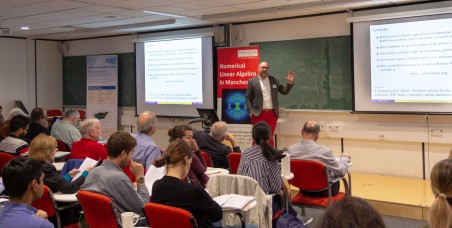 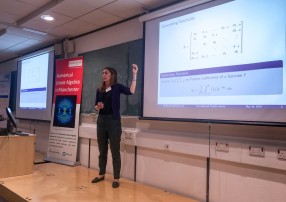 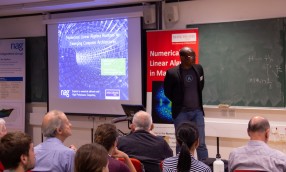 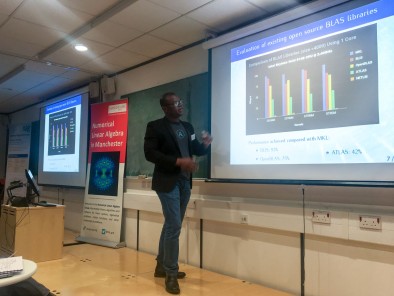 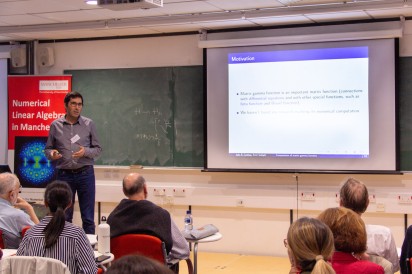 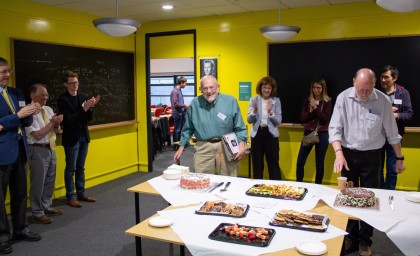 Speakers on the Atrium Bridge

Posted on May 2, 2019 by Stephanie Lai Leave a comment

Professor Françoise Tisseur has been elected as the new SIAM United Kingdom and Republic of Ireland Section President (SIAM UKIE) for 2 years starting in May 2019.  She previously served as Vice President, 2013-2015.

In her candidate statement for the election, Françoise said “I would like to grow SIAM membership in our region. I will support the 14 SIAM student chapters, encourage the establishment of new ones, continue the recent SIAM-IMA cooperation and promote joint meetings between the two societies. I will work to ensure that the annual meeting is successful and has a suitably diverse program that includes industrial involvement.”

The SIAM UKIE Section was formed in 1996 by the Society for Industrial and Applied Mathematics (SIAM) with the aim of promoting and supporting applied and industrial mathematics in the UK and the Republic of Ireland. 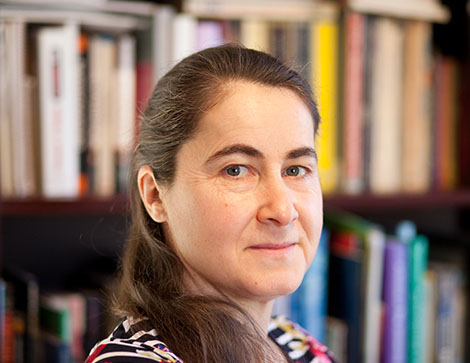 Jack Dongarra elected as Foreign Member of the Royal Society

Posted on April 18, 2019 by Stephanie Lai Leave a comment

Jack Dongarra, Professor and Turing Fellow in the School of Mathematics and member of the Numerical Linear Algebra Group, has been elected as a Foreign Member of the Royal Society.  This honour recognizes his seminal contributions to algorithms for numerical linear algebra and the design and development of high performance mathematical software for machines ranging from workstations to the largest parallel computers.

Dongarra’s software and libraries, which include LINPACK, EISPACK, LAPACK, the BLAS, MPI, ATLAS, PLASMA, MAGMA, and PAPI, are universally considered as standards, both in academia and industry. They excel in the accuracy of the underlying numerical algorithms and the reliability and performance of the software. They benefit a very wide range of users through their incorporation into software including MATLAB, Maple, Mathematica, Octave, R, SciPy, and vendor libraries.

The Royal Society is the oldest scientific academy in continuous existence, going back to 1663. Each year the Royal Society elects up to 52 new Fellows and up to 10 new Foreign Members. Fellows and Foreign Members are elected for life on the basis of excellence in science. Each candidate is considered on their merits and can be proposed from any sector of the scientific community.

The full list of the newly elected Fellows and Foreign Members of the Royal Society is available here.

Last February the SIAM Computational Science and Engineering (CSE19) conference took place in Spokane, WA, USA. We organized a two-part minisymposium on recent Advances in Analyzing Floating-point Errors in Computational Science (see links to part 1 and part 2). Below is the list of the eight talks along with the slides which we have made available.

Posted on January 18, 2019 by Stephanie Lai Leave a comment

Congratulations to Jack Dongarra who recently received the SIAM/ACM Prize in Computational Science and Engineering.

Jack Dongarra will receive the SIAM/ACM Prize in Computational Science and Engineering at the SIAM Conference on Computational Science and Engineering (CSE19) held February 25 – March 1, 2019 in Spokane, Washington. He will receive the award and deliver his prize lecture, “The Singular Value Decomposition: Anatomy of an Algorithm, Optimizing for Performance,” on February 28, 2019.

SIAM and the Association for Computing Machinery (ACM) jointly award the SIAM/ACM Prize in Computational Science and Engineering every two years at the SIAM Conference on Computational Science and Engineering for outstanding contributions to the development and use of mathematical and computational tools and methods for the solution of science and engineering problems. With this award, SIAM and ACM recognize Dongarra for his key role in the development of software and software standards, software repositories, performance and benchmarking software, and in community efforts to prepare for the challenges of exascale computing, especially in adapting linear algebra infrastructure to emerging architectures.

When asked about his research for which the prize was awarded, Dongarra said “I have been involved in the design and development of high performance mathematical software for the past 35 years, especially regarding linear algebra libraries for sequential, parallel, vector, and accelerated computers. Of course, the work that led to this award could not have been achieved without the help, support, collaboration, and interactions of many people over the years. I have had the good fortune of working on a number of high profile projects: in the area of mathematical software, EISPACK, LINPACK, LAPACK, ScaLAPACK, ATLAS and today with PLASMA, MAGMA, and SLATE; community de facto standards such as the BLAS, MPI, and PVM; performance analysis and benchmarking tools such as the PAPI, LINPACK benchmark, the Top500, and HPCG benchmarks; and the software repository netlib, arguably the first open source repository for publicly available mathematical software.”

This article was extracted from SIAM News. Further information is available here. 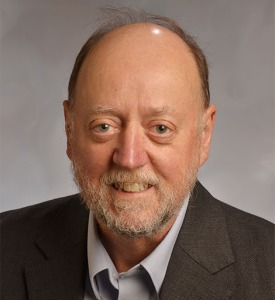 Posted on December 17, 2018 by Stephanie Lai Leave a comment

The Gilles Kahn prize was awarded to Theo Mary for his PhD thesis Block Low-Rank multifrontal solvers: complexity, performance, and scalability (pdf here). The thesis was prepared at the University of Toulouse, France and co-supervised by Patrick Amestoy and Alfredo Buttari. Theo is currently a Research Associate in the Numerical Linear Algebra group.

The Gilles Kahn prize is awarded each year by the SIF, the French Society of Computer Science, for an excellent PhD thesis in the field of computer science.

In the thesis, Theo investigated the use of low-rank approximations inside direct, factorization-based methods to reduce the computational cost of the solution of large, sparse systems of linear equations. His work included theoretically computing the asymptotic complexity reduction achieved by these methods and implementing them on parallel computers to translate this theoretical reduction into significant performance gains on both shared- and distributed-memory architectures. The potential and efficiency of these methods was assessed on several industrial applications, notably ones arising in geosciences and structural mechanics.

Posted on December 3, 2018 by Stephanie Lai Leave a comment

This Knowledge Transfer Partnership (KTP), funded by NAG and the Technology Strategy Board of Innovate UK, will

The project builds on a long history of collaboration between NAG and the Manchester Numerical Linear Algebra Group.

Posted on October 16, 2018 by Stephanie Lai Leave a comment

Professor Nick Higham has been selected as an invited speaker at the International Congress on Industrial and Applied Mathematics (ICIAM) in Valencia, Spain, July 2019.

Posted on October 4, 2018 by Stephanie Lai Leave a comment

Steven Elsworth has been awarded a SIAM Student Travel Award to attend the 2019 SIAM Conference on Computational Science and Engineering (CSE19) in Spokane, Washington. These travel awards support strong PhD students to present their work at SIAM conferences with $650 for domestic travel and $800 for intercontinental travel, as well as free registration. The application process is competitive, with a strong record of scholarship being one of the criteria.

Steven is a third-year PhD student on a CASE Studentship with Sabisu, a long-standing industry partner of our School. In Spokane, Steven will give a minisymposium talk about the RKToolbox, which he develops with his supervisor Dr Stefan Güttel. The RKToolbox is written in MATLAB and collects scientific computing tools based on rational Krylov methods. This is already Steven’s second SIAM Student Travel Award: in May 2018 he presented work at the SIAM Conference on Applied Linear Algebra in Hong Kong.

What Is the Trace of a Matrix?

What Is a Diagonalizable Matrix?

What Is a Stochastic Matrix?

What Is the Inertia of a Matrix?

What Is Gershgorin’s Theorem?

What Is a Nilpotent Matrix?

What Is an Eigenvalue?

What Is a Symmetric Indefinite Matrix?

What Is a Toeplitz Matrix?